My last post eluded that embroidery and bleeding were close partners.  I may have been a tad over dramatic in implying that.  I have not actually bled since giving embroidery a try.  I have stuck myself many many many times.  To reiterate:  no bleeding, lots of sticking.

I decided to give embroidery a try, because I was lucky enough to know the Maxwell/Englund clan while in Chapel Hill.  I met Max – a take-no-prisoners kind of gal with beautiful tattoos and the knitting skills of a rock star – while working at the Carolina Brewery.  Fast forward to me sitting in her house at a Stitch-n-Bitch (where women gather to knit, drink, and talk) and being amazed at just how much could be accomplished with a pair of talented hands and the right materials.  Her mother, Charlotte, would often be in attendance.  After meeting Charlotte, you quickly understand where Max learned how to be both domestic goddess and downright bad ass.  Max motivates me to continue working on my knitting.  Charlotte inspired me to see what else my hands might be capable of.  They likely had no clue that I was observing so closely or that I miss having the opportunity to be part of those gatherings.  I reckon they do now. 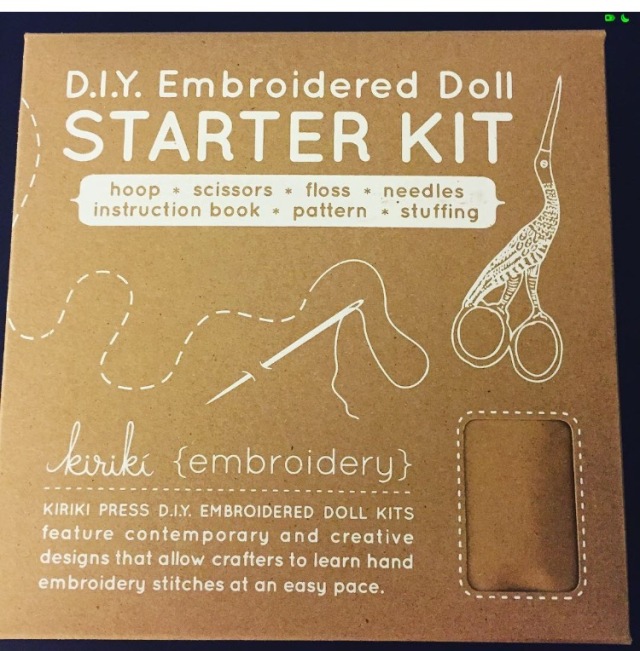 This is what I received in the mail!  I appreciate that the packaging wasn’t brightly colored and childlike.  It has an adult appeal to it.

I found the embroidery kit while glancing around the Purl Soho website.  Max shared the website with me, and I adore many of their patterns.  Their yarn is crazy expensive, though.  I typically just look to see what patterns they have without any intention of making a purchase.  Purl Soho was selling these embroidery kits that are created by Kiriki Press.  Kiriki Press offers several embroidery kit options at various skill levels.  The kits are cute, could potentially produce an adorable product (that part depends on me), and were decently priced.  Couldn’t hurt and, at the most, I waste a little money that I was bound to waste on something. 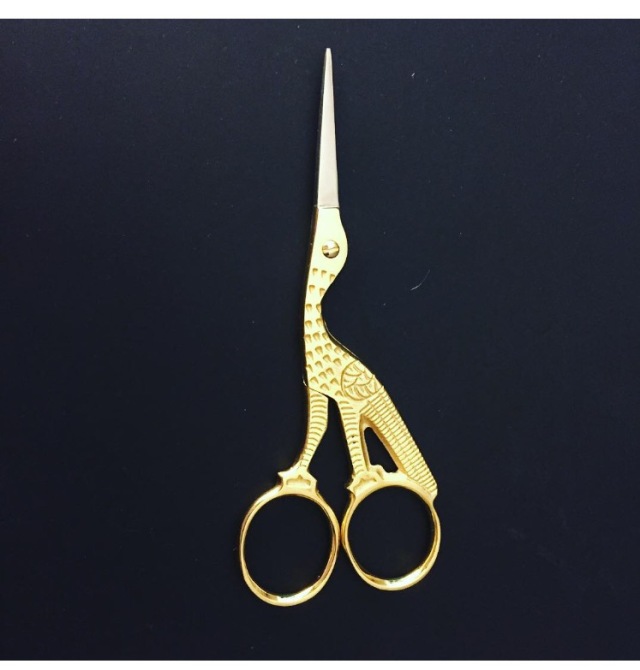 But really.  I love these.  I’ve since Googled “animal themed embroidery scissors” and started making a wish list.  They are delicate and beautiful and absolutely wonderful.

Kit was purchased.  Kit was received.  Kit was deceptively simple in appearance.  The kit comes with a screen print, scissors, thread, needles, very basic pattern, and a booklet that describes some of the base stitches.  My first opinions are as follows:

Screen print:  it is a no-neck panda – what could be cuter?

Scissors:  I love them!  They make me feel both domestic and exotic.

Pattern:  I can totally handle this.  It is made for ages “12+” and allows “crafters to learn hand embroidery stitches at an easy pace.”  I will not be defeated.

Booklet:  Confidence produced by impressions of the pattern are mildly squashed at seeing diagrams of needles and thread doing all kinds of crazy things.

I decided not to stress too much and just dive on in.  I was shocked at how useless the diagrams were – I recommend looking up a YouTube video where they use giant thread.  I found the booklet images to present a very simple version of what should happen rather than offering insight into what is likely to happen.  There should have also been a disclaimer that warned against any hope of even stitches on your first try.  Not going to happen.  I should have also been required to present an updated eye exam before purchasing the kit, because I quickly realized how out of date my glasses prescription is while desperately trying to get thin thread into a tiny hole on a sharp needle.  I’m calling the optometrist tomorrow.

Another thing that blows my mind:  trying to get a needle into a very specific spot while not really having any sensation of where the needle is in space.  You hold the pattern so that it faces you.  Half of the time you are embroidering, the needle is behind the pattern.  Without being able to directly see the needle, you try to poke it through the back of the pattern into the exact place you want it.  (Why don’t you just flip the pattern over?  I tried that and it immediately felt like a rookie mistake.  I spent almost as much time flipping the pattern as I did moving the needle. Seemed more efficient to keep the pattern still and focus more on getting my eyes used to not seeing what I was doing.)  My mind had no clue where my hands were.  I thought I was moving the needle in the right direction and would see it surface far from its mark (this resulted in most of the sticking I mentioned earlier).  That part seems to be getting better.  It took me some time to learn how the thread and the fabric work and resist one another.  I’m also learning how the stitches should look, how much thread is a good amount and how much will just make you curse at knots.  It’s a process but not a miserable one.  That is promising. 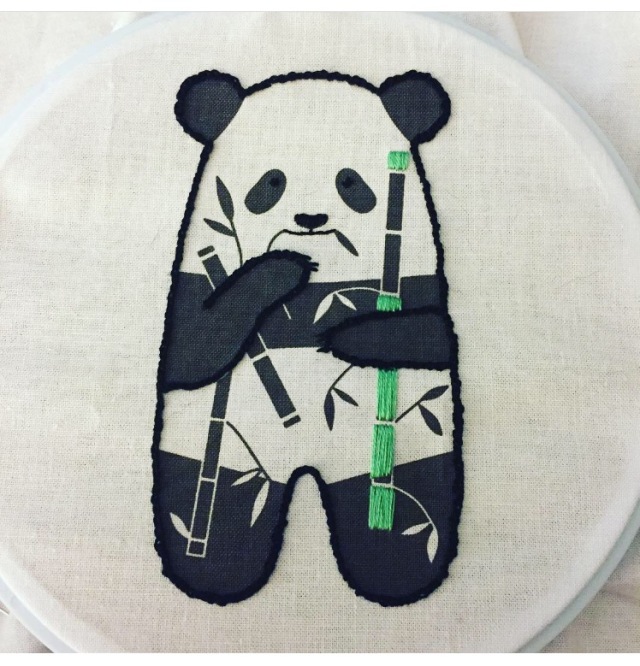 The outline is done – it almost looks fuzzy!!  And the bamboo is developing a into a delicious treat.

In other news, I’m off to Beaufort, North Carolina this weekend for engagement celebrations!  More to come.  (Don’t get excited.  Not my engagement.)

If you think others may enjoy this, feel free to share!